5 Books to Swim Through

Now that the Olympics and the Paralympics are over I’m feeling a big wide gap in my swim consumption. Sure, there’s always national and international coverage on champions and tournaments and world-records. And god knows I’ve been spending a lot of time looking back at replays both from this past year’s olympics and the prior ones. But I find myself without a story to latch onto. That’s why I’ve started to (flip)turn towards swimming books. Whether you know the characters in a story or not, every time you read a story it’s as if you’re experiencing it for the first time. Reading a story never happens the same way twice. As you change, so do your views and associations. A story may remind of one thing during your first read, but during a second read you may find yourself launched into a whole other world.

As you can tell, I’m pretty stoked to be getting some good reading on. Specifically, swimming reading. I’ve combed the interwebs and the below books are currently on my to-read list.

The Joy of Swimming: A Celebration of Our Love for Getting in the Water

Just one look through the pages of The Joy of Swimming is enough to make you want to keep a copy of it on your coffee table forever. But this is so much more than a coffee table book. Using beautiful illustrations, Lisa Congdon explores the history of swimming, some of the greatest athletes ever to hit the water, and some of the most inspiring quotes ever said. Being a swimmer herself, Congdon infects every page with her passion for the sport with the end result of making you want to hop in the pool. (Note that Lynne Cox, mentioned below, writes the foreword!)

The 50 Meter Jungle: How Olympic Gold Medal Swimmers Are Made

Before there was Michale Phelps there was Mark Spitz. Like Phelps, Spitz set all sorts of records. At the 1972 Munich Olympics he scored 7 medals (Phelps later broke this record in 2008). Although his career was more short-lived than Phelps’ Spitz left an indelible mark on US swimming. The 50 Meter Jungle is penned by Spitz’ coach Sherman Cavoor and paints a portrait of swimming back in the 60s and 70s. Swimming has change greatly since then, but the core aim for breaking records and bringing home the gold remains the same. Chasing Water: Elegy of an Olympian

by Anthony Ervin and Constantine Markides

Anthony Ervin may not hold as many gold medals as Michael Phelps or Mark Spitz, but his story is one of battling with oneself to achieve the otherwise impossible. Ervin sets out to be an Olympic hero. At the age of 19, he manages to win an Olympic Gold in the 2000 Sydney games. But Ervin soon realizes that getting the gold is just the beginning. After winning the gold, he retired from swimming, battled with depression and an attempted suicide attempt, joined a rock band, and hung around Zen temples. Then in 2012, he decided to return to the Olympics once again, and in doing so, he managed to swim faster than he ever has before.

The “There’s No Way” Choice 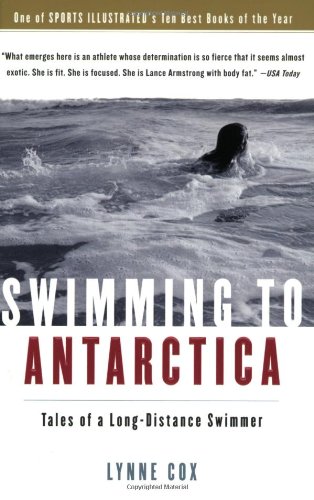 Swimming to Antarctica: Tales of a Long-Distance Swimmer

by Lynne Cox and Martha Kaplan

This could have easily been the “Extremely Inspirational Choice”, but the truth is that I’m in such awe of Lynne Cox that it’s tough for me to even aspire to her level of greatness. By age 16 (sixteen!), she had already broken all records for swimming across the English Channel. She went on to pursue a life of swimming across formidable bodies of water including the Bering Strait (38 degree water!), the Cape of Good Hope (great white sharks!), and the Antarctic Ocean (the Antarctic Ocean!). In a world that had specific ideas of what a woman could and could not do, Lynne defied all boundaries placed before her and swam across them.

The Three Year Swim Club: The Untold Story of Maui’s Sugar Ditch Kids and Their Quest for Olympic Gold

This story sounds unbelievably uplifting. It’s 1937. A group of poverty-stricken kids are working away on a sugarcane plantation on the island of Maui. Their school teacher, who is no great swimmer, encourages the kids to become great at swimming. He pushes them to become Olympians. The kids have to navigate one obstacle after another, including their own poverty and the rising tides of anti-Japanese sentiment. The kids manage to break many world records and qualify for the Olympics, but with the arrival of World War II, their dream gets put on hold. Then, after the War the kids (now adults) have one more shot at achieving their dreams

I’m super excited to get underway with this new barrage of reading. Do you have any favorite swimming books? If so, I’m always taking recommendations @Nick_Fainlight.